Threads Run Thru It is owned and operated by Steve and  Lori Clayton.

The Claytons retired from the United States Navy in 1990, Lori as a Navy Nurse and Steve as a Chief Warrant Officer.  In 2003, they moved to their farm in Phenix, Va, and built a log home. Lori was looking for ways to keep busy.

In 2004 she purchased a commercial embroidery machine and started “Threads Run Thru It” from her home. Lori’s embroidery business was doing well, but she knew there was more she could be involved with to stay busy. In 2007, they purchased a Gammill Longarm Quilting machine. In 2008, they upgraded to the Statler Stitcher computerized version. By this time, her business had taken over their home, consuming nearly 1500 feet of the 3000-foot house. In March 2010, Steve said enough is enough and in April 2010, he started construction on their quilt shop. “She wanted her shop built so bad that she helped me pour footings,” Steve said.

ars she made hundreds of items such as shirts, dresses, valances, table cloths and runners, curtains, costumes.  “You name it, I tried to sew it,” Lori shared.  In the mid 1980s, she learned to quilt.  In the back of her mind, she dreamed of owning her own quilt shop someday and now, her dream is reality. In 2010, they opened their quilt shop. In 2017, they moved the quilt shop to a new location in Rustburg, Virginia and converted the former shop into a longarm training center.

Lori shares, “The good Lord has blessed us more than one can imagine. Our health is good, we have great friends, we are members of Midway Baptist Church and have four wonderful children.  Jessica  graduated from nursing school in Lynchburg, VA. and now works in Richmond. Gus (married to Grace) is a sailor in the United States Coast Guard stationed in NJ.  Andrea (married to James) is a Nurse in Fredericksburg, VA. And Casey (married to Matt) is a teacher in Arizona.  We have four grandsons, Eli, Silas, Will, and Wes, and one granddaughter, Ella. What a treasure it is to have such beautiful grandchildren.”

Subdealers: Contact a sub dealer near you for retail purchases, education, service, and to try Gammill machines and equipment.

A Touch of Thread was founded in 2003 by Martha Creasy, a fourth-generation quilter from Zanesville, Ohio. Her passion for quilting sparked when her mother opened a small quilt shop in the quaint village of Dresden, Ohio in 1991. In 1995, Martha purchased her first Gammill longarm quilting machine, and it was “love at first stitch.” Shortly, she began custom quilting for a handful of clients from her mother’s shop. This small group quickly blossomed into a large base of loyal clientele. Upon a visit to the Gammill headquarters in West Plains, Missouri nearly 10 years later, Martha was so impressed she decided to take her love of longarm quilting and open her own authorized Gammill and Statler dealership. Shortly after opening, her husband Doug made the business his full time career after 23 years in electric motor repair industry. Doug delivers and sets up our machines, as well as services them. Martha’s oldest son, Dustin manages the store. Adam, Martha’s other son also sets up and delivers machines. Dougie, their youngest son, helps in the quilting gallery as well. 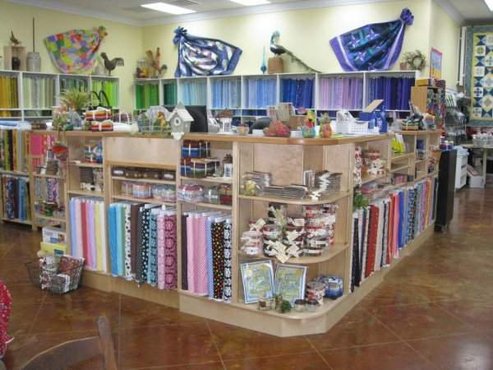 The Stitch-N-Frame Shop in Vicksburg, Mississippi has been in business since 1983. It is a full-line quilt shop with more than 9,000 bolts of fabric including more than 1000 batiks. The store started out with cross-stitch and knitting supplies and over the years those have been phased out and quilting has taken over. The owner Mary Kay Elliott inherited the shop from her mother and is carrying on the tradition of serving all of Mississippi and Louisiana, portions of southern Arkansas, western Tennessee and Alabama with the finest quality quilt fabrics, books, notions, classes, blocks of the month, kits and all the things quilters need. The store is located at Exit 11 off of I20, a major east-west highway stretching across the south. If you’re ever in the area please stop by and see them. Vicksburg has a rich history from the Civil War and there are battlefields you can tour, antebellum homes with cannon balls still embedded in the walls, a military park and Civil War museum, just to name a few of the attractions.

Contact a Sales Representative near you to try a Gammill machine.

Linda’s Electric Quilters was created in 1995 as one of the first Gammill Dealers.  LEQ says “We have more than 20 years of combined experience and talents in the longarm industry.  This experience has enabled us to understand the longarm quilting industry and learn how the longarm quilting machine operates.  When you purchase a Gammill quilting machine from us, you can be assured that we will provide you with the very best experience and training in the industry.  We also are the “go to” place for all your quilting supplies.” LEQ carries a large selection of thread, batting, patterns and other longarm related supplies. LEQ is located in McKinney, Texas and has a sales team that reaches throughout Texas and Oklahoma.

LEQ has a great team of employees with years of knowledge about Gammill Quilting Machines and the quilting industry. They are there to help you with your machine and supplies, whether it is your hobby, or you wish to enhance your skills or start up a small business.

History of Linda’s Electric Quilters: Linda V. and Rick Taylor started LEQ in 1995. They invested years of experience and talents into making some of the world’s finest quilts, understanding the longarm quilting industry, and learning how the longarm machines operates. Dianna and Daren Heiner took over operations in 2012. Dianna was a trusted employee of theirs since 2001, gaining extensive knowledge of the longarm industry. Daren joined with his wife in 2012 and has a background in Manufacturing Engineering and Quality Assurance.  They have two children Corey and Ryan.

Known for many years as The Lakes Sewing Centers, in 2007 the company changed its name to Mulqueen Sewing Centers. Today, Mulqueen Sewing Centers operates four successful operations in Arizona, including stores in Chandler, Glendale, and two in Mesa. Over the years the growth of the company has mirrored that of the region’s population expansion. Today the company is the largest business of its kind in the region, and provides a wide variety of products and services. Mulqueen Sewing Centers is a family business through and through. Operated by Pat Mulqueen and his wife, Bridget, their sons Ken, Keith and Darren are also integral to the company’s success, growth and future. Each of these dynamic businessmen have been involved in the family operation since they were teenagers.

The SewNSew has been serving the Glendora, California sewing commun 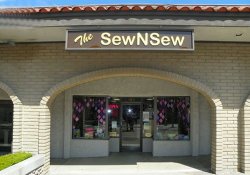 ity since 2010, offering an extensive selection to meet a wide variety of creative needs.

The store originally opened in a small 950-square-foot space, but within three years expanded to a 4500-square-foot space, housing nearly 7,000 bolts of fabric.  At SewNSew, we truly enjoy the beauty of fabric and thread, as well as the creative process that blends them into unique pieces of art.   Our classes, taught by qualified teachers in a friendly, no-pressure atmosphere, are designed to help each student succeed at sewing, no matter their age or skill level.

Family-owned and operated since 1930, Meissner Sewing Machine Company has built its reputation on quality products and excellent personalized service. Each of the Meissner locations offers classes, clubs, seminars and special events designed to educate and inspire 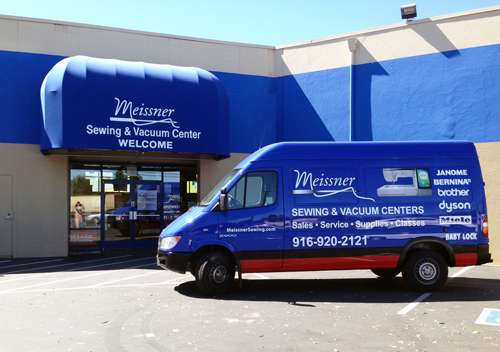 sewers at all levels in a fun environment with the finest products available on the market today. They support all of the products they sell with unsurpassed technical service and hundreds of fun classes and seminars. In 2015 Meissner’s completed a remodel at their Sacramento Superstore and turned the existing warehouse into a long-arm showroom and training center. The Long-Arm Center is home to the complete line of Gammill machines as well as other brands. Meissner’s currently offers a Rental Certification program in which customers learn to use hand-guided Gammill quilting machines. The program started in April of 2015 and has really taken off. So far, they have certified just over 200 customers and those customers have finished 400 plus quilts. “Words cannot express the joy the renters feel when they have completed their quilt from start to finish. Some of our renters love the quilting so much they have gone from renters to owners”. For more longarm quilting information from Meissner visit http://www.MeissnerSewing.com/household/long-arm-center.